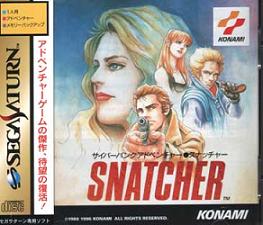 On June 6, 1996, a chemical weapon known as Lucifer-Alpha under development in Russia, is released into the atmosphere, resulting in the death of 80% of the Eurasian and Eastern European population which in turn results in the death of half of the world's population. The contaminated area becomes uninhabitable for a decade, when Lucifer-Alpha mutates into a non-lethal form. This tragic event later becomes known as "the Catastrophe".

Fifty years later, a breed of artificial life-forms or bioroids known as "Snatchers" began appearing in the artificial island of Neo Kobe City, killing their victims and taking their place in society. Nobody knows exactly what they are or where they come from. It is up to Gillian Seed, an amnesiac working for an Anti-Snatcher task force called J.U.N.K.E.R., and his Robot Buddy, Metal Gear, to track down the source of the Snatchers and discover Gillian's mysterious connections to them.

A graphic-adventure game written and directed by Hideo Kojima, set in a Cyberpunk universe (with clear Blade Runner overtones), with all of the quirkiness the game designer is known for, and more than a couple Shout Outs to other Konami games and the Metal Gear series. In Japan, Snatcher was originally released for the PC-88 and MSX2 computer platforms in 1988 and then remade for the PC Engine in Super CD-ROM-ROM format in 1992, followed by another set of re-releases in 1996 for the PlayStation and Sega Saturn. The only English version produced is the 1994 Sega CD version, which regularly sells on eBay for about $200, thanks to the game's limited distribution of a quarter million copies (due to the decline of the Sega CD add-on at the time of its release).

Highly recommended for anyone with old Sega equipment (or KEGA Fusion); everyone else can follow along with the Let's Play's of both the original (in both screenshot and video formats) and SD Snatcher by Something Awful's Slowbeef and Snatcher counterpart 0xBEEF.

Though no sequel to Snatcher was ever made, the game was remade on the MSX2 as a Super-Deformed RPG titled SD Snatcher, and a Spiritual Successor titled Policenauts was released for various platforms.

Tropes used in Snatcher include:
Retrieved from "https://allthetropes.org/w/index.php?title=Snatcher&oldid=1899390"
Categories:
Cookies help us deliver our services. By using our services, you agree to our use of cookies.