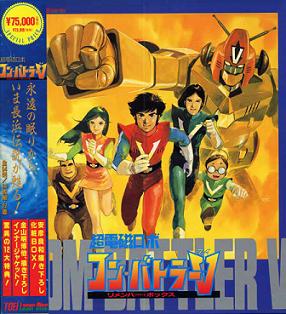 Chōdenji Robo Combattler V (Chōdenji Robo Konbatorā Bui) is the first part of the Robot Romance Trilogy of Super Robot series created by "Saburo Yatsude" and directed by Tadao Nagahama. The robot's name is a portmanteau of Combine, Combat and Battle, and the V is intended both as an abbreviation for "victory" and in reference to the five component machines that form the robot, as well as its five pilots. The V is proununced as the letter V, whereas in the follow-up series, Voltes V, it is prounounced "5".

The series (along with the later two shows) was created by Saburo Yatsude, who would later go on to create GoLion (best familiar to American viewers as the "Lion Force" half of Voltron). "Saburo Yatsude" is not a real person, but a pseudonym which refers to the collective staff at Toei (the main office, rather than the animation studio; the series was animated by Nippon Sunrise and produced by Toei Co. Ltd).

Thousands of years ago, the people of the planet Campbell decided to leave their planet and seek out new worlds to inhabit. One group, lead by the scientist Oreana, landed on Earth, but was delayed from their mission. In the early 21st century, Oreana's group reawakens and begins their plan to conquer the Earth.

The only effective defense against the Campbellians' giant bio-mechanical slave beasts is the super-electromagnetic robot, Combattler V and its pilots.

The entire series follows the then-standard Monster of the Week format, with the first season featuring Garuda sending various mecha to defeat Combattler V. His tactics range from brute force to cunningness and taking hostages. At one point he even duels Hyouma in a sword fight with their feet chained together. As the series moves on, his trust for Oreana lessens. Garuda eventually discovers that he is in fact a cyborg after chancing on a room containing numerous failed attempts at creating him. In the final episode of the first season, he defeats Oreana, and then duels Combattler V, which eventually leads to his defeat.

The second season features Empress Janera and her generals Dungele and Warchimedes. Eventually, the entire base of the Campbellian empress is deployed, and only through the help of the airborne Nanbara Connection Base is Combattler V able to destroy it. However, Janera manages to deploy an Earth Bomb which is supposed to destroy the Earth. Notably, the team is not dispirited, but are quite calm and instead happy for having the chance to fight to protect Earth. Just as it looks as though Earth will be destroyed, the "true" leader of the Campbellians, Deus, riding in a golden wagon, informs the team of the coup d'etat at Campbell, and stops the bomb seconds before it reaches the Earth.

The series was brought over to the US in a fashion... As part of a toyline called Shogun Warriors that also included other super Robots such as Raideen and Great Mazinger In 1979 Marvel Comics licensed it as part of the 20-part miniseries Shogun Warriors, along with Reideen and Planet Robo Danguard Ace, under the name Combattra. One of the latter issues in the series even featured the standard "Heroic misunderstanding" with the Fantastic Four.

Tropes used in Combattler V include:
Retrieved from "https://allthetropes.org/w/index.php?title=Combattler_V&oldid=1797571"
Categories:
Cookies help us deliver our services. By using our services, you agree to our use of cookies.