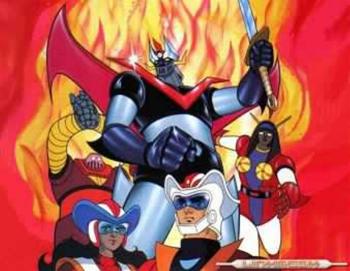 Great Mazinger is the second entry of the Mazinger trilogy.

Several millennia ago, a powerful civilization named Mykene thrived in the Greek island of Bardos. To defend their island from invaders, they employed metallic giants that blasted tongues of fire from their chests. However, an earthquake destroyed their island and the Mykene disappeared. For a long while it was believed they perished right then, but it was false. In reality they were forced to seek shelter underground, and a lot of them grafted their heads into powerful mechanical bodies to survive. However they longed to return to the surface again and getting the sunlight, fresh air, and unpolluted water back.

Many centuries later, Dr. Hell and Dr. Kabuto conducted research on Bardos and through different means both of them reached the conclusion that their civilization was still alive. Dr. Hell decided on allying himself with one them (which would be a bad move). Dr. Kabuto suspected the Mykene were preparing to return to the surface and take it back from humans and he decided to start taking precautions.

When his son and his daughter-in-law were mortally injured in a laboratory accident that went awry, he turned his son into a cyborg to keep him alive and revealed to him his plans and his fears. Kenzo Kabuto agreed to work secretly to prevent the Mykene invasion.

After the ending of Mazinger Z, Mazinger Z was easily destroyed by the Mykene Battle Beasts. Kouji and Sayaka went to study in America, leaving the defense of Earth on the hands of Tetsuya Tsurugi and Jun Hono, two combat-pro orphans who are slightly Darker and Edgier compared to Kouji and Sayaka. Piloting Great Mazinger -an upgrade to Mazinger Z, built by Kenzo, Kouji’s Not Quite Dead father, by improving upon his father’s plans- and Venus A, Tetsuya and Jun go to battle the Mykene Empire, led by the Emperor of Darkness, and eventually Tetsuya becomes the Worthy Opponent of The Dragon, The Great General of Darkness.

Considered Darker and Edgier than his predecessor, ‘’Great Mazinger’’ was less successful and less popular among fans, nonetheless, despite of it has more angst and character development. ‘’Great Mazinger’’ was followed by the next -and final- entry of the trilogy, UFO Robo Grendizer. There was several Crossovers among it and other Go Nagai series –such like ‘’Getter Robo’’ and ‘’UFO Robo Grendizer’’-, and the two main characters reappeared in ‘’Mazinkaiser’’.

A Character Sheet is now in construction.

Tropes used in Great Mazinger include:
Retrieved from "https://allthetropes.org/w/index.php?title=Great_Mazinger&oldid=1635809"
Categories: