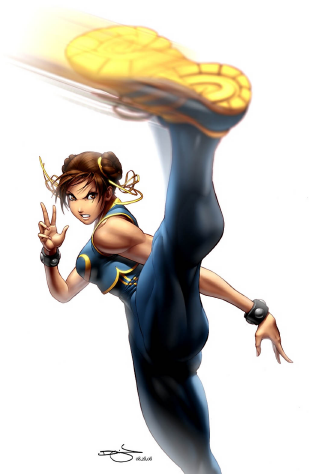 She's got legs! She also knows how to use them.

A character (Always Female, hence the name) who fights almost entirely with kicks for the purpose of showing off her legs. She may occasionally throw a punch, but kicking is her primary means of offense. Why do some fighters do this? Perhaps it's because kicks have better range, or feet with shoes are less sensitive to pain than bare hands, or they have stronger legs than arms. However, in her case it's partly due to the Rule of Sexy.

In reality, women do generally have much stronger lower bodies than upper bodies, which means that they're naturally more inclined to use kicks than punches. Also, as the first instinct of any attacker is to bind or otherwise incapacitate the arms (and leave the legs relatively free so that you don't have to carry her), it's quite practical to deal damage with your means of locomotion. And every girl knows the classic "kick 'em in the nuts" move for self-defense—it works on women too, by the way.

Primarily an Action Girl trope. A sub-trope of Extremity Extremist, one that requires the character is female, that her fighting style is almost entirely kicks, and she has an essence of Fan Service to her kicking as well. Sometimes (but not always) have strapping lower bodies as a result of the reliance on and muscular development of their legs. See also Waif Fu, and contrast White Magician Girl. Compare Roundhouse Kick.

Examples of Kick Chick include:

Retrieved from "https://allthetropes.org/w/index.php?title=Kick_Chick&oldid=1927066"
Categories:
Cookies help us deliver our services. By using our services, you agree to our use of cookies.