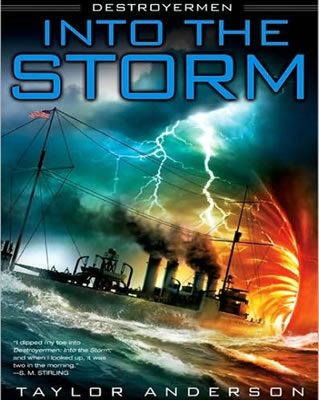 Destroyermen is an Alternate History series by Taylor Anderson. It centers around the crew of USS Walker, a World War II destroyer who are catapulted to an alternate world after a disastrous Allied defeat at Java. The new world is right out of prehistory: dinosaurs roam the lands, and the oceans are home to swarms of man-eating fish and giant reptiles. They've also gone from one war to another, for here two very different species have just started up a fight for survival again after several thousand years. On the one side are the Lemurians, (or 'Cats, as the Americans call them) lemur-like sea-goers who have lived a rather peaceful existence until now. On the other side are the Grik, savage raptor-like reptiles hell-bent on hunting the 'Cats to extinction.

Walker and her crew side with the Lemurians and join the struggle against the Grik. They're outnumbered and outgunned -- but that part hasn't stopped them yet.

Tropes used in Destroyermen include:
Retrieved from "https://allthetropes.org/w/index.php?title=Destroyermen&oldid=1678673"
Categories: