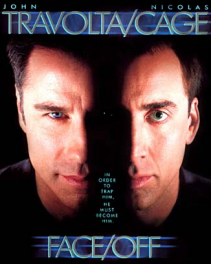 Face/Off is the second American Heroic Bloodshed film by Hong Kong director John Woo, starring John Travolta and Nicolas Cage playing an FBI agent and terrorist, as arch enemies fighting it out to see who can use the most guns at the same time. Oh, and then they switch places to save LA.

Sean Archer, an FBI agent, pursues his Arch Enemy, terrorist Castor Troy. Archer wants revenge on Castor Troy because the terrorist killed his son with a bullet meant for him. Archer succeeds in capturing Troy, but learns that before Castor went into a coma, he had placed a bomb somewhere in Los Angeles.

In order to get close to the bomb and save the city, Archer is forced to surgically transplant his face with Castor's. Unfortunately, Castor wakes up from his coma and takes Archer's face for himself, and begins inserting himself into Archer's life and family. Said family including wife Dr. Eve Archer (Joan Allen) and daughter Jamie Archer (Dominique Swain).

Although the film is a straight-up action flick with all the requisite high-speed chases, hidden bombs and hostage situations, it's also very much tongue-in-cheek.

Tropes used in Face Off include:

Troy!Sean: I want to take his face...off!
Dietrich: No more drugs for that man.