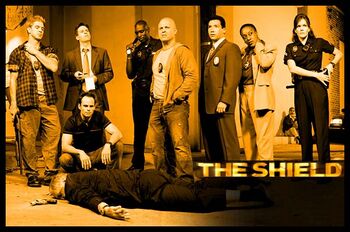 The hyperactive Shakespearian counterpart to the Dickensian The Wire, The Shield is a fast-paced, tense cop show about a team of police officers working at The Barn, an experimental police precinct in Farmington (a fictional area of Los Angeles). Although Michael Chiklis is the star of the series, the show is mainly an ensemble show, as the series explores the goings-on within the Farmington Precinct, including the various power struggles and interpersonal drama (often with Chiklis's character, corrupt police detective Vic Mackey, in the midst of the chaos and intrigue).

The central focus of the show is corrupt detective Vic Mackey and the elite anti-gang task force known as "The Strike Team" that he leads. Tasked with the monumental job of keeping the streets of Farmington safe from drug dealers and gang members, Mackey and the other members of the close-knit team generally go about their task with violent efficiency and the occasional act of police corruption. The Strike Team often create Faustian deals with the criminal elements of Farmington, giving them free reign to run the drug trade within the city in exchange for bribes, intel on other gang members, and a promise to keep their illegal antics at a reasonable level so as to ensure the illusion of peace within Farmington.

Other aspects of the show deal with the rank and file members of the Farmington Precinct -- most notably, detectives Holland "Dutch" Wagenbach and Claudette Wyms, who generally deal with more general crimes of rape and murder within the district. They serve as the moral opposite of Vic Mackey and the Strike Team, which leads to much tension between the two sides when they are forced to work together on related cases (or when Dutch and Claudette are forced to clean up the inevitable fall-out from the Strike Team's corrupt antics, with them knowing Vic was involved somehow in the bloodshed but being unable to find the smoking gun linking him to it). Several patrol officers, ranging from Danielle "Danny" Sofer, her protege Julian Lowe, and rookie cop Tina Hanlon, are also featured; these officers find themselves struggling to advance up the ranks while dealing with the unappreciated job of keeping Farmington safe.

Other characters include police captain-turned-politician David Acaveda, whose disdain for Vic Mackey and his corrupt antics clash with his political ambitions (which ironically drives him further and further into bed with Vic as the series progresses). Vic's estranged ex-wife Corrine, who spends the bulk of the series trying to separate herself and her children from her ex-husband before his crimes destroy their lives, is also in the mix.

Like The Sopranos, the show goes to lengths to show that Vic -- and, to a lesser extent, the rest of the Strike Team -- have both good and bad sides. In spite of being a corrupt cop and a dangerous man capable of great violence, many of Vic's criminal actions are motivated by the stress of his job (due to the unrealistic pressures placed on him to shut down crime in the district) and the desire to provide for his family, of which two of his three children have been diagnosed with autism. There are some lines he refuses to cross, and he has absolutely zero tolerance for rape, pedophilia, and domestic violence. He also shows a great deal of loyalty towards his teammates, often preaching the message of team loyalty to bond the four men into a surrogate family.

For the most part, however, Vic's conscience is driven mainly by the influence of Strike Team member Curtis "Lem" Lemansky. Lem serves as the counterpart to Vic's much abused "yes-man" partner, Shane Vendrell. Rounding out the group is Ronnie Gardocki, a quiet and nerdy police detective whose silent loyalty to Vic balances Lem and Shane's polar opposite personalities.

Tropes used in The Shield include:
Retrieved from "https://allthetropes.org/w/index.php?title=The_Shield&oldid=1831924"
Categories:
Cookies help us deliver our services. By using our services, you agree to our use of cookies.