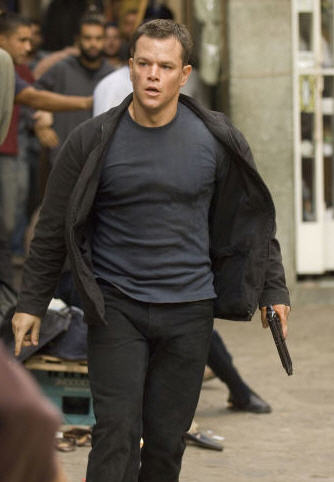 A series of action films tenuously (pretty tenuously) based on the Robert Ludlum books of the same name and starring Matt Damon. It revolutionized the spy genre for its simplicity as well as for having a smart protagonist, eurotrotting (with virtually zero California Doubling), well-crafted suspense and aggressive action sequences. Jason Bourne is an amnesiac who finds himself with super-assassin skills and has to stay on the run from former employers and whoever else wants to manipulate him to evil ends. Each movie follows a slightly different story but retains some basic elements of Bourne eluding government custody, killing a fellow assassin with some household implement and going for an innovative and harrowing car chase.

So far, there are five films in the series:

The success of the films, especially the first two, helped influence the direction of the rebooted James Bond franchise with Casino Royale.

Tropes used in The Bourne Series include:

Retrieved from "https://allthetropes.org/w/index.php?title=The_Bourne_Series_(film)&oldid=1483772"
Categories:
Cookies help us deliver our services. By using our services, you agree to our use of cookies.