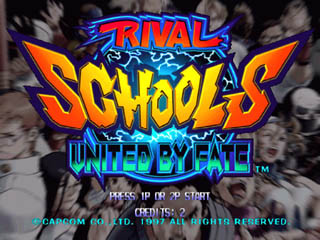 Rival Schools, known as Justice Gakuen (lit. "Justice Academy") in Japan, was one of Capcom's attempts to make a 3D Fighting Game. It was notable for having a continuous plotline, in a genre where the plot was often secondary to the fighting. Students from all around Japan have mysteriously been disappearing, and teams of students from various high schools wind up fighting to figure out the person(s) behind it all. Players formed teams of two (which could be switched between rounds), and could call their partners in to assist them with an extra hit or energy boost (a feature borrowed from Marvel vs. Capcom that would also later make its way into a few of The King of Fighters games). The PlayStation port added many Mini Games alongside the main fighting game, as well as a character creation mode based off of Dating Sim games. The latter, however, never made it outside Japan thanks to how much of an undertaking it would be to translate to other languages, but all the other home version extras made it. In Japan, the game later got re-released with two new characters, as well as a revamped character creation mode.

It was later followed by a sequel Project Justice which introduced new characters, expanded the team size to three, and brought on even more school fighting mayhem. In this go around, there aren't as many kidnappings, but students start acting completely wacky, so the same students and teachers (as well as new ones) set out to find out what's going on. The Japanese version again had a character creation mode, this time in the form of the digitized board games (in the vein of Mario Party) that were all the rage at the time.

The games are rather obscure, so there is not likely to be a sequel any time soon. Despite that though Capcom doesn't seem to have forgotten about it though as characters can be seen in the Capcom vs. Whatever games (namely Capcom vs. SNK 2, Namco X Capcom and Tatsunoko vs. Capcom). However, in 2012, the PlayStation version of United by Fate was re-released as part of Sony's PSN Classics program in Japan, leaving hope that the series might not be finished just yet...

Tropes used in Rival Schools include:
Retrieved from "https://allthetropes.org/w/index.php?title=Rival_Schools&oldid=1947194"
Categories:
Cookies help us deliver our services. By using our services, you agree to our use of cookies.