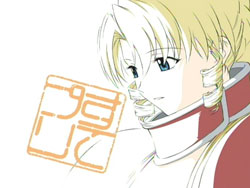 Scrapped Princess is a light novel series written by Ichiro Sakaki, which was later adapted into a 24-episode anime. It centers around a seemingly 15-year old girl named Pacifica Casull, a cheerful, perky (and somewhat naive) princess who is destined to cause The End of the World as We Know It. Protected by her older siblings Shannon and Raquel, Pacifica is forced to flee across the world to escape those who want to kill her: kings, peasants, a religious order, and certain mysterious strangers...all while coming to terms with her destiny and making friends with the few travelers who don't yet know of her so-called "cursed" nature.

What starts out as a typical-looking Medieval European Fantasy anime takes a dip into Science Fiction territory at around the halfway point, without straying too far from its fantasy roots. Despite the show's premise (one girl against the world), a lot of the characters Pacifica meets on her journey act reasonably honorable, even though they have their own reasons for doing what they do. With great production values and a strong script by Reiko Yoshida (of Tokyo Mew Mew and Digimon Tamers fame), this is one of the better series you're probably not watching. The anime and manga are licensed and released in full; the light novels were licensed, but were apparently dropped with fifteen books to go.

Tropes used in Scrapped Princess include:

Tropes used in the light novels:

Retrieved from "https://allthetropes.org/w/index.php?title=Scrapped_Princess&oldid=1962776"
Categories:
Cookies help us deliver our services. By using our services, you agree to our use of cookies.