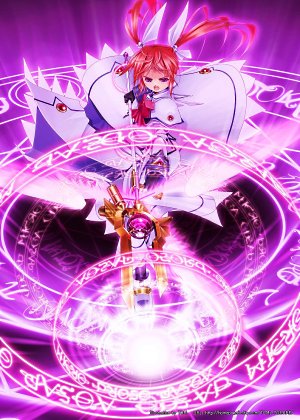 Young, magical, and about to deliver a world of hurt... and possibly friendship.

The intersection of Magical Girl with Superhero(ine).

In Japan, the extended growth-to-maturity metaphor Magical Girl archetype can mean a variety of things; some do more than use their powers to improve or complicate their lives. Some go out and battle Dramatic Evil, usually with a lot of mystic firepower, weird outfits (usually a glammed-up Mini-Dress of Power, sometimes crossed with School Uniforms Are the New Black), a Battle Intro, and called attacks. This is not magic for magic's sake; the character rarely finds this enjoyable but gets morally cowed into it.

The action-oriented Magical Girl Warriors have the extra bonus of appeal to male demographics, so they can be very lucrative; in this case they often resemble Distaff Counterparts of Japanese superheroes, particularly Sentai and other Henshin Hero characters. Importers of Magical Girl series to the West tend to favor these characters, so Magical Girl Warriors tends to become the established trope over Cute Witches.

They can also be Kicking Ass in All Her Finery, if the girl is outright Badass and her dress is frilly enough.

The Dark Magical Girl mostly appears in Magical Girl Warrior series. Not to be confused with the unrelated Magic Knight.

The Other Wiki calls this character type a "transforming heroine".

Examples of Magical Girl Warrior include:

Retrieved from "https://allthetropes.org/w/index.php?title=Magical_Girl_Warrior&oldid=1931482"
Categories:
Cookies help us deliver our services. By using our services, you agree to our use of cookies.