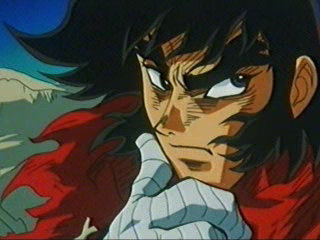 Don't get too close -- you might poke an eye out on them.

Hot-Bloodedness isn't reserved just for people. It can be applied to many things—hair, for example.

Hotblooded Sideburns are a pair of short, fiery earlocks typically found on passionate Super Robot pilots and Sentai team leaders that usually offer up a quick visual indicator of their Hot-Blooded character. While they don't have to be huge (though they usually are), they are always spiky and noticeable. Usually, they're paired up with some equally fiery eyebrows for added effect.

It should be noted that "sideburn" is a slight misnomer, as Hotblooded Sideburns are rarely actually attached to the face anywhere below the ears. They're occasionally referred to as "Nagaideburns" (after famed Super Robot Genre Mangaka and former Trope Namer Go Nagai) to make this distinction.

Due to its inherent association with Super Robot shows of the 70s and 80s, this is also a form of Seventies or Eighties Hair, and its appearance on female characters to show how badass they were has nearly died out.

Examples of Hotblooded Sideburns include:

He is easily recognized by his muscular frame, his sharp blue eyes, his braids (don't ever call them dreadlocks; do you know what you have to do to your hair to get dreadlocks?), but most people instead choose to pick him out by his sideburns, which are rumored to think and act independently of him.