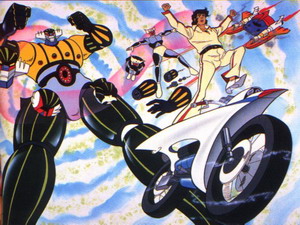 Also known as "Steel Jeeg" or "El Vengador", Kotetsu Jeeg is another classic Humongous Mecha anime created by Go Nagai in cooperation with Tatsuya Yasuda and first released in 1975. Essentially a Combining Mecha series, it told the story of Shiiba Hiroshi, a car racer who's reconstructed as a cyborg by his father after being mortally wounded in an accident. As a cyborg, Hiroshi's capable of transforming into the eponymous Kotetsu Jeeg, a steel robot head that combines with a variety of external parts to form a giant robot and fight the minions of Queen Himika, leader of the Jamatai Kingdom.

The series received a sequel, Kotetsushin ("Steel God") Jeeg in 2007, taking place fifty years after the original and featuring both new and classic characters.

Tropes used in Kotetsu Jeeg include:
Retrieved from "https://allthetropes.org/w/index.php?title=Kotetsu_Jeeg&oldid=1726965"
Categories:
Cookies help us deliver our services. By using our services, you agree to our use of cookies.