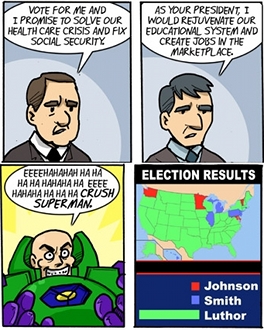 "Look at these people; amazing how sheep'll turn up for the slaughter
No-one condemning, you're lined up like lemmings and led to the water
Why can't they see what I see? Why can't they hear the lies?


Maybe the fee's too pricey for them to realize..."
—Dr. Horrible, Dr. Horrible's Sing-Along Blog

Gullible Lemmings not only believe the villain but actively try to help him. They aren't Mooks or Les Collaborateurs, just regular citizens being what they think is a Heroic Bystander.

A subtrope of Dying Like Animals. Generally facilitate the existence of the Easily-Conquered World. See Horrible Judge of Character when this trope is applied to individuals. See also Good All Along and Burn the Witch.

Examples of Gullible Lemmings include:

"My election platform was to build a giant robot sawblade that would cut Canada off at the top and then attach it to Australia so they wouldn't bother us anymore! My vice president... is Fu Manchu! What the hell is wrong with you people?! I'm pretty sure that's not even legal! Oh, man, we are so going to jack this country up beyond repair!"