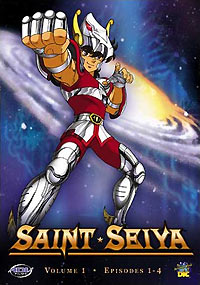 Pegasus Seiya in his anime-only Cloth.

Staple manga and later anime during the '80s by Masami Kurumada. It tells the story of five friends who serve the reincarnation of the goddess Athena, Saori Kido, in her quest to reclaim her place as ruler of the Saints, a group of warriors themed after the Western Zodiac and pretty much every charted constellation.

Each saint gets a suit of armor that can transform from a sculpture of their signature constellation into functional battle armor. There are three grades of armor, Bronze, Silver, and Gold, with each grade being far more powerful and resilient than the last. Each armor is also an Empathic Weapon and has some amount of choice in who wears it and whether they deserve to use it, as well as at least one special property.

The five core cast members are:

The first arc is the Sanctuary Arc. Saori Kido, heiress to a vast empire, holds special games to see which among the bronze saints deserves the Sagittarius Gold Cloth: an armor so powerful it is considered to confer the power of a Weapon of Mass Destruction to its wearer. Seiya, Shiryu, Hyoga and Shun (among others) meet there to fight for it, but before the winner can be decided the Gold Cloth is stolen away by the Black Saints, renegade saints led by Ikki.

The story in the anime and manga differs considerably following Ikki's defeat, but it centers in the Bronze Saints facing several other saints sent by the Sanctuary with orders to kill them (and in the anime only, recover the Sagittarius Cloth helmet, the only part of the Cloth the good guys were able to keep). Midway through the battles against the Silver Saints, it is revealed that Saori is the reincarnation of Athena and leadership of Sanctuary is hers by right, which at the time is under control of the nefarious Pope (no, not that one), who wants her dead so he can claim her position as protector of the Earth. Eventually Saori and all the Bronze Saints decide to challenge the Pope directly, and travel to the Sanctuary. Due to some treachery, Athena/Saori is hit by an arrow powerful enough to fell a god in twelve hours... time which the Saints must use to defeat the other eleven Gold Saints and use the shield on the statue of Athena to save their goddess from death.

Later arcs tend to follow this form, with a series of fights to reach the offending god or mortal intent on bringing about a worldwide calamity while working under a time limit, failure leading to Athena's death or the destruction of the world. These arcs were Asgard, Poseidon, Hades, and Heaven. Both the last are ongoing.

The series was dubbed in English as Knights Of The Zodiac (which is actually the name the series has in most of the world outside Japan) and shown on Cartoon Network, but the plot and characters didn't receive very good treatment, and it wasn't very popular. ADV Films would later re-release the series on DVD with a new, much more faithful dub (note the page image). However, outside the States it was immensely popular. In Latin America, in particular, Los Caballeros del Zodiaco/Os Cavaleiros do Zodí­aco has a raging Fandom up to this day, and the series is re-run constantly. Part of this is attributed to its phenomenal dub and respect for the source material. And in Europe it's not slouch either, specially France and Spain, where even to this day the manga sells by the crap loads.

And it turns out that an OVA telling of Saint Seiya: The Lost Canvas is being produced and entered its second season in 2011. In the meantime, we recommend another of Kurumada's works, B't X.

In Spring 2012, there will be a sequel to the original series[2] titled Saint Seiya Omega.

Saint Seiya also received myriads of video games, but none of them usually reached high qualities. However, recently, a Dynasty Warriors spinoff called Saint Seiya Senki/Chronicles for Play Station 3 is in the works, by both Bandai Namco and Dimps. Thus far, this seems to be the most highly anticipated Saint Seiya game ever.

Tropes used in Saint Seiya include:
Retrieved from "https://allthetropes.org/w/index.php?title=Saint_Seiya&oldid=1675342"
Categories: