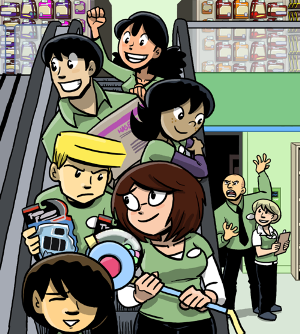 Pictured top to bottom: Robin, Ethan, Malaya, Mike, Amber, Faz, with Galasso and Leslie off to the side. Not pictured: Ken, Drew, Ultra-Car, Conquest, Ronald Reagan...

Shortpacked! is a webcomic by David Willis and a part of the Walkyverse. It ran from 2005 to 2015, with April Fools strips every year since.

The title refers to the toy store where the main characters work, and the strip starts with Robin -- It's Walky's hyperactive speedster—taking a position there as a saleswoman. Mike has already been working there for some time by then, in spite of... certain factors that may render this unlikely. The cast also includes:

The general tone of the comic is lighter and wackier than its predecessors, and though its characters do indulge in angst from time to time, it's more the result of, say, the moral ramifications of keeping your boss prisoner in a storage closet than any realism in the storylines. It's also more pop-culture oriented—jokes regarding Transformers and Batman abound—and more prone to filler than Willis's previous works. Whether or not this is a bad thing depends on how big a fan you are of Transformers and Batman.

Retrieved from "https://allthetropes.org/w/index.php?title=Shortpacked!&oldid=1852616"
Categories:
Cookies help us deliver our services. By using our services, you agree to our use of cookies.