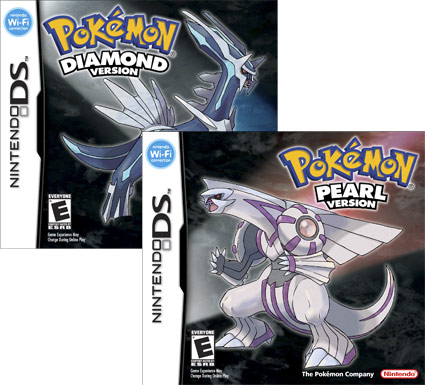 The fourth generation of Pokémon games, Diamond and Pearl hit the Nintendo DS in 2006. Taking place in Sinnoh, the Pokémon world version of the Japanese island of Hokkaido, the plot is familiar territory for the series: you, a child from the modest little village of Twinleaf Town, and your hyperactive best friend, have a fateful encounter with Professor Rowan, the local authority on Pokémon, and his well-meaning but inexperienced assistant. Said encounter leaves you both with your first Pokémon, so naturally you set out To Be a Master, collecting monsters and badges and challenging/defeating opposing Trainers along the way.

At some point you also encounter Team Galactic, a group that claims to be researching new forms of energy, but isn't above unabashedly illegal acts in broad daylight...what exactly are their goals? As the Player Character, naturally your hero's on a crash course to find out...

Being a Pokémon game, a third version, titled Platinum, came out a couple years down the line. Platinum tweaked the storyline a bit, adding more characters, remodeling several Gyms, and naturally including new challenges for players.

Not to be confused with seasons 10 through 13 of the Pokémon anime. For the bootleg under the name "Pokemon Diamond", see Telefang.

Tropes used in Diamond, Pearl and Platinum:
Retrieved from "https://allthetropes.org/w/index.php?title=Pokémon_Diamond_and_Pearl&oldid=1855501"
Categories:
Cookies help us deliver our services. By using our services, you agree to our use of cookies.