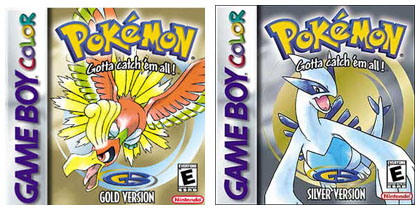 After the massive success of the first Pokémon games, Game Freak and Nintendo realized they had a Cash Cow Franchise on their hands. So naturally, Pokémon Gold And Silver were developed for the Game Boy as the “second generation,” moving the series to a new region filled with more Mons, threats, and challenges to await players.

Set three years after the events of Pokémon Red and Blue Versions, a young trainer sets out to collect the eight badges of Johto (based on the Kansai region of Japan as well as the western part of the Chubu region) and challenge the Elite Four so that they can earn their own place in the hall of fame. Along the way, however, they have to contend with a callous thief and the reemerging threat of Team Rocket.

Gold and Silver introduced many new concepts to the series, like an In-Universe Game Clock (with certain Mons preferring certain times of day), the ability to equip Pokémon with items, rare alternate colorations, and the ability to breed baby Pokémon. It also expanded and reconfigured numerous other gameplay elements, like the addition of two new elemental types (bring the grand total to 17!), splitting the “Special” stat into separate attack and defense scores, and new skills designed to give other elemental types a more level field to battle against the (previously game‐breaking) Psychic element.

One year later, an Updated Rerelease appeared: Crystal. On top of a new subplot revolving around Suicune, a slight graphics bump, and other minor differences, Crystal marked the debut of the Purely Aesthetic Gender option in the series, by offering players the choice of a male or female player, instead of simply giving them a male character to assign a masculine or feminine name to (thereby bypassing the unintentional Les Yay that could’ve resulted — now it’s the result of lines written for the male player character being read to the female one).

After Red and Blue got a Video Game Remake in FireRed and LeafGreen, fans fully expected to see the “metal generation” get their own updates. In late 2009, those expectations were finally met with HeartGold and SoulSilver for the Nintendo DS. Unlike the remakes of the first generation games (which mostly updated them to Generation III’s mechanics and graphics), these remakes pulled elements from everywhere else in the series; not only did they include the added plot points from Crystal, the original storyline was further expanded upon, pulling in cameos and Continuity Nods from later regions. New minigames were added via the Pokéathlon and PokéWalker, and one of Yellow’s main gimmicks was brought into play, allowing trainers to let one of their Pokémon run free behind them and interact freely with them instead of remaining on standby like the rest of the player’s Party in My Pocket. Major changes were made to some areas as well, such as the addition of a new Safari Zone (noticeably missing from the original versions) which can be accessed even before beating the game.

Tropes used in Gold, Silver and Crystal:
Tropes used in HeartGold and SoulSilver:
Retrieved from "https://allthetropes.org/w/index.php?title=Pokémon_Gold_and_Silver&oldid=1747263"
Categories:
Cookies help us deliver our services. By using our services, you agree to our use of cookies.