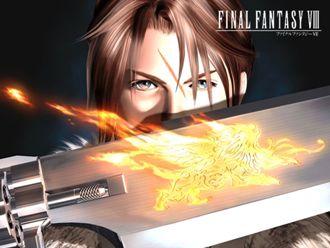 The eighth entry into the finger-flayingly popular Final Fantasy series. Originally released on PlayStation and home computer, and ported to the Playstation Network for the Play Station 3 and PSP.

Squall Leonhart is a student at an Elaborate University High for mercenaries named Balamb Garden. The organisation that runs Balamb Garden, SeeD, takes in prepubescent orphans and trains them to become soldiers, requiring them to graduate before their twentieth birthday.

Squall is the epitome of a professional soldier: he's powerful, efficient, and unflappable. He is also an emotionally-stunted Jerkass and introvert who shuns the friendship of others. During his first mission as a SeeD, he is sent to aid a resistance movement against the occupying Galbadian Army and meets his opposite: Rinoa Heartilly, an outgoing, positive young woman naive to the realities of battle. The fight against Galbadia quickly escalates to a war against the mysterious Sorceress Edea, a battle that soon transcends time and space.

The fandom either loved it or hated it. The hyper-success of Final Fantasy VII meant that Final Fantasy VIII had incredible expectations to live up to. The two opposing fan camps over the game's quality are just as vocal today as they were when the game was first released.

Final Fantasy VIII has many things that set it apart from Final Fantasy VII. It is set in a more modern setting compared to VII's late-'80s Cyberpunk vibe, a sleek and futuristic world without Fantasy Gun Control. Monsters use Level Scaling to level up compared to the party average, making it entirely possible to level one character up to Lv.100 without even starting the plot, or beat the game without earning a single experience point. Instead of equipping armour, characters "junction" summon creatures, and can increase their effectiveness by draining and stockpiling magic spells from enemies. It also foregoes a Mana Meter for Vancian Magic.

Also notable is the game's localization process. Prior to Final Fantasy VIII, localizations were carried out after the game's completion, which usually resulted in either a Blind Idiot Translation or one replete with Woolseyisms. Starting with this game, Squaresoft hired translators to work alongside the Japanese development team as the game was being created, which started what is now pretty much the standard procedure for Final Fantasy translations.

Retrieved from "https://allthetropes.org/w/index.php?title=Final_Fantasy_VIII&oldid=1744573"
Categories:
Cookies help us deliver our services. By using our services, you agree to our use of cookies.