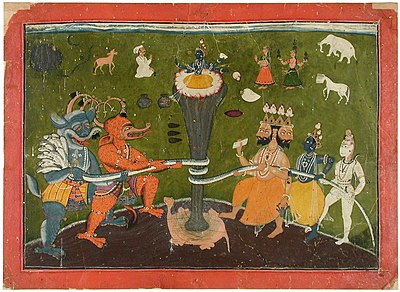 The Churning of the Sea of Milk

Hindu Mythology is the mythology of both Ancient and Modern India, used as moral allegory to convey spiritual truths. There are as many myths in Hinduism as there are people, so it is impossible to describe every single one.

Vedic Gods – the Devas – tend to be nature deities. There are strong parallels among the Vedic gods to the gods of Classical, Celtic, and Norse Mythology, as the Greeks, Romans, Celts, and ancient Germans shared a common ancestral mythology with the ancient Aryans of the Vedic Age. Indra is the leader of the Gods, and he controls lightning (he's considered to be roughly equivalent to Zeus/Jupiter and Thor). Varuna controls water (equivalent to Ouranos/Uranus and the Norse Ullr), Vayu controls the wind, and Surya is the god of the Sun (equivalent to the Classical Helios/Sol – whose attributes were later appropriated by Apollo – and the Norse/Germanic personification of the Sun, Sól).

The Vedic Gods live in Heaven and continuously fight the Asuras, their evil cousins, to prevent them from obtaining immortality or dominance.[1] They tend to be considered subservient to the Hindu Trinity.

The Hindu Trinity is post-Vedic – and thus has few cognates abroad – and consists of Brahma the Creator, Vishnu the Preserver, and Shiva the Destroyer. Brahma is rarely worshiped in comparison to Vishnu and Shiva, but is still considered equal within the Trinity. Vishnu is mostly known for his 10 Avatars and Shiva is known for his unorthodoxy, fierce anger, and fierce forgiveness. Vishnu is married to the goddess Laxmi, the Goddess of Wealth and Prosperity; Shiva is married to the goddess Parvati, the Goddess of Strength and Courage; and Brahma married to Saraswathi, Goddess of Wisdom and Knowledge.

Other important deities include Kali (a berserk form of Durga/Parvati), and Kanon. Maya is more akin to a lesser apsara that illustrates illusion.

Major Hindu sacred texts include the Mahabharata, Bhagavad Gita, Ramayana, and Upanishads. The above are Older Than Feudalism, but the four Vedas[2] are Older Than Dirt, and the Puranas are only Older Than Print.

Tropes used in Hindu Mythology include:

Retrieved from "https://allthetropes.org/w/index.php?title=Hindu_Mythology&oldid=1977864"
Categories:
Cookies help us deliver our services. By using our services, you agree to our use of cookies.