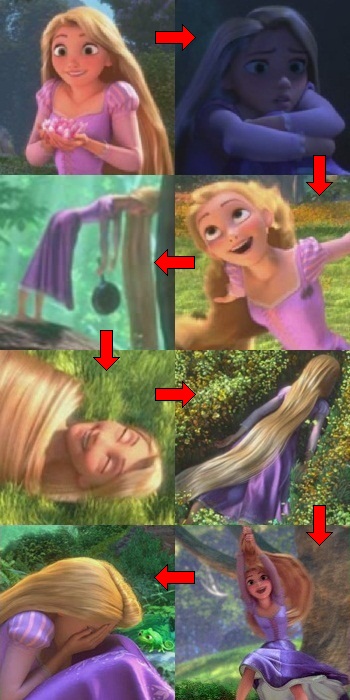 All this takes place over the course of 43 seconds.

A character whose personality isn't marked by any set mood, but by their tendency to swing between moods drastically. Sometimes (if the characters around them are lucky) there's some sort of warning of an impending mood swing—or at least a recognizable cause—but there may just as easily be no warning whatsoever.

Though they may be referred to as "bipolar", their mood swings are generally much more abrupt and frequent than the periods of mania or depression associated with type I of real-life bipolar disorder. This can, however, be a facet of type II bipolar disorder or borderline personality disorder.

This is a stereotypical trait of women who are currently menstruating or suffering from PMS. It is Truth in Television, and fairly common at that, but not typically as extreme as fiction portrays it to be nor as universal. Also, not every woman whose mood is affected by menstrual hormones will be susceptible to every mood; some get stuck swinging into one mood and temporarily become a Fragile Flower or acquire a Hair-Trigger Temper. Since the same hormones are involved, pregnant women are also known for being Mood Swingers.

The Mood Swinger as a Love Interest frequently fills the role of the Tsundere. This is also a common trait of The Caligula.

Examples of Mood Swinger include:

Retrieved from "https://allthetropes.org/w/index.php?title=Mood_Swinger&oldid=1894334"
Categories:
Cookies help us deliver our services. By using our services, you agree to our use of cookies.