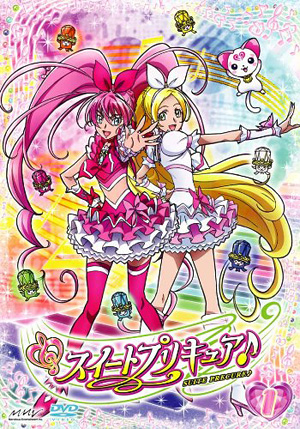 The eighth entry in the Pretty Cure franchise.

Meanwhile, middle school sophomores and former childhood friends Hibiki Houjou and Kanade Minamino are recovering from yet another fight with each other when they encounter Siren, a former Songstress of Major Land who has defected to Mephisto's side. Siren attempts to take the G-Clefs within their hearts for the Melody of Sorrow, but accidentally triggers an amazing potential, causing the girls to transform into Major World's champions, Pretty Cure.

As Cure Melody and Cure Rhythm respectively, it's now up to Hibiki and Kanade to work with Hummy and gather the Notes of the Legendary Score. However, it's not so simple: the Pretty Cure power is fuelled by The Power of Friendship, and the two former-friends have many, many issues that they need to work out first.

The Pretty Cure Power Trio is later completed with the arrival of Cure Beat, Siren after undergoing a Heel Face Turn and being stuck in human form as Ellen Kurokawa. They also have an Aloof Ally called Cure Muse, a mysterious masked fighter who helps out Pretty Cure but claims no affiliation with them until revealing herself as Ako Shirabe, the daughter of Aphrodite and Mephisto.

Tropes used in Suite Pretty Cure include:
Retrieved from "https://allthetropes.org/w/index.php?title=Suite_Pretty_Cure&oldid=1831739"
Categories:
Cookies help us deliver our services. By using our services, you agree to our use of cookies.