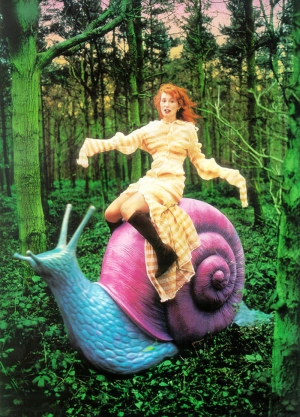 SHE CONQUERED THE MIGHTY MOON SNAIL!

She's not normal, that's for sure. The only thing you can pin down about the Strange Girl is that she's hard to pin down (when she isn't doing the pinning, that is). She's visually distinct from her normal peer group, typically in both physical appearance (she's likely to be an Eerie Pale-Skinned Brunette/Raven Hair, Ivory Skin) and dress, but sometimes only one of the two. As far as demeanor is concerned, she can be anything from The Wonka, a Cloudcuckoolander, The Stoic, a world conqueror, The Messiah, The Ophelia, an Emotionless Girl, Haruhi... or quiet, sensible and even friendly. Anything goes as long as it stands out from the series' norm.

The unifying trait of all Strange Girls is that they are protagonists and most importantly, are different from their peers (though rarely will she be completely friendless). Her family or home life will be... interesting to say the least. Usually she is in touch with the supernatural aspects of her setting, even if she doesn't have powers herself. Because of this tendency to experience strange and supernatural adventures, it's not uncommon for their social clique to grow into a veritable Monster Mash of friends they've helped in various adventures, though they'll likely start out the series with at least one or two Unfazed Everymen as completely human friends. Before long she's likely to have seen so much weirdness little if anything will faze her.

This character is very likely to be a Goth or show noticeable Goth influences, both in style of dress and in personality. The Goth subculture is particularly well-suited to this character type because it's made up of people who enjoy strange, morbid things, on top of the fact that being different from the mainstream is one of the things that defines all countercultural subcultures. That last part means that it would also be quite reasonable for a Strange Girl to be a member of the punk or Emo[1] subcultures, among others.

Tends to overlap with Dark Is Not Evil. Compare Manic Pixie Dream Girl, Rei Ayanami Expy, or The Ophelia. Contrast The Snark Knight.

Examples of Strange Girl include:

Retrieved from "https://allthetropes.org/w/index.php?title=Strange_Girl&oldid=1951838"
Categories:
Cookies help us deliver our services. By using our services, you agree to our use of cookies.