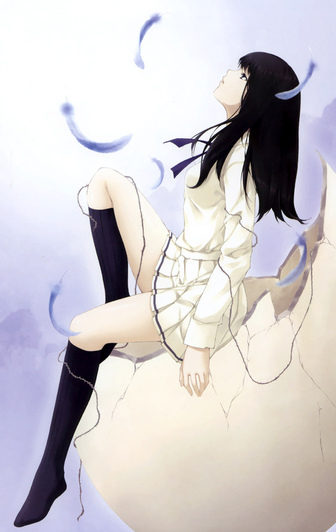 It’s Tokyo in 1956, right during the middle of the American occupation. Tokisaka Reiji is an ex-cop turned detective after the death of his fiancée six years ago to a serial killer known only by the name Rokushiki Makoto. The story begins when a pair of mutilated bodies are discovered and Reiji’s assistance is requested. At the same time a mysterious young girl named Kuchiki Toko makes a strange request: Please find my true self.

As all the victims have been young female students, Reiji is asked by the school with the most missing students to take a temporary lecturing job while he investigates. The school is rather oppressive and is seemingly populated almost entirely by indistinguishable drones. There are only a few students who seem to have a spark of individuality, and among them are several of the girls who have already been killed. At the academy, he runs into Toko again who asks if he’s made any progress. Can Reiji stop more murders from being committed and also discover whatever it is Toko is looking for?

Kara no Shoujo was released in early July 2011 by Mangagamer after they purchased the translation from a fan group.

Tropes used in Kara no Shoujo include:
Retrieved from "https://allthetropes.org/w/index.php?title=Kara_no_Shoujo&oldid=1469700"
Categories: