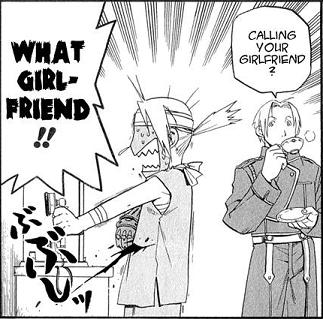 Ladies and gentlemen: one of Edward Elric's Berserk Buttons.

Yes, she is. And if she isn't, she eventually will be. Resistance Is Futile. Narrative Causality compels you.

A standard response in the face of an accusation that two characters are more than Just Friends. Usually said with an exclamation point - or ten - at the end, with emphasis on the "NOT", maybe accompanied by smashing something.

"He is not my boyfriend!" is another version, albeit not as common, probably in a 65/35% ratio. There are also instances when the two accused say it simultaneously.

Is it true? Technically, yes. Hilarity, if not bloodshed, ensues, because:

A common inversion, especially in the second case, is when the speaker is asked about the not girlfriend/boyfriend in question, and they respond with the line, even though the accusation was never brought up in the first place. Cue satisfied smirk by the asker.

Especially common in shows and on channels ("Teen" Nick goes crazy with this) where kids and/or preteens are the main audience. Quite interesting, as more often than not, most kids probably aren't even ready for that kinda stuff yet, and therefore probably could use whatever interpretation comes their way. For some, the trope can be coupled with the fact that it allows for both a male and female protagonist in starring roles (thus reaching a wider audience) but is pretty much as far as the either the Media Watchdogs or writers will ever go in terms of illustrating romance and relationships in a series.

See also Relative Error, for when the pair involved are relatives of each other.

One of the stock phrases for Tsunderes (both genders), or one/both of a couple who are Just Friends.

This does not result in The Not Love Interest.

Compare/contrast with Stupid Sexy Friend, wherein deciding they should just be friends is contrasted with the thoughts of being more than friends one can't get rid of.

Examples of She Is Not My Girlfriend include:

Retrieved from "https://allthetropes.org/w/index.php?title=She_Is_Not_My_Girlfriend&oldid=1967716"
Categories:
Cookies help us deliver our services. By using our services, you agree to our use of cookies.