Kingpin in His Gym 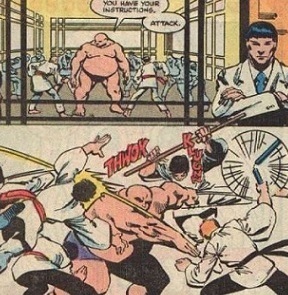 Some Almighty Overlords like to do more than lounge around on nice chairs in their fortresses. They'll go for a bit of self-improvement instead. Some may get a Training Montage or two, while others may pursue a Dangerous Forbidden Technique or Forgotten Superweapon in parallel with The Hero. Regardless of how they choose to better themselves, showing a villain building his prowess can be a menacing taste of what's to come when the heroes finally reaches his doorstep. Like our good old friend, however, they don't pose any direct physical threat to the good guys at the moment.

One of the ways to show that a villain's Authority Equals Asskicking. However, if the training sessions are shown to be a walk in the park, one wonders how they will make the villain any stronger. Shopping is another popular hobby of villains.

Contrast with Orcus on His Throne and Slouch of Villainy.

Examples of Kingpin in His Gym include:

Retrieved from "https://allthetropes.org/w/index.php?title=Kingpin_in_His_Gym&oldid=1843942"
Categories:
Cookies help us deliver our services. By using our services, you agree to our use of cookies.