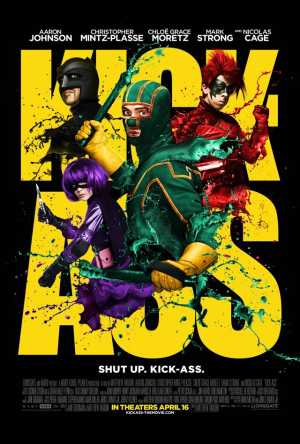 A 2010 action-comedy co-distributed by Lionsgate (in North America) and Universal Pictures (internationally), based on the comics by Mark Millar and John Romita Jr. Our page on the comic is here.

Dave Lizewski is an Ordinary High School Student and a big fan of Comic Books, with one burning question: How come nobody's ever tried to be a superhero in Real Life before? After he gets mugged, the question drives him to obsession, and he decides to answer it by becoming one himself. He orders a wetsuit and a diving mask and tries to fight crime. It doesn't go all that well. He gradually learns and gets better, with a little help from a more experienced pair of costumed vigilantes, a father-daughter team bent on hunting down the Big Bad.

Along the way, it manages to brutally deconstruct pretty much every superhero trope out there in an attempt to (somewhat) realistically answer the question, "What would happen if someone with no special powers tried to be a superhero?" And promptly brutally reconstructs it with a vengeance halfway through.

Followed by a sequel, the predictably-named Kick-Ass II, in 2013. A third Kick-Ass film was confirmed in June 2014, but no official release date has yet been announced.

Tropes used in Kick-Ass (film) include:
Retrieved from "https://allthetropes.org/w/index.php?title=Kick-Ass_(film)&oldid=1649563"
Categories:
Cookies help us deliver our services. By using our services, you agree to our use of cookies.