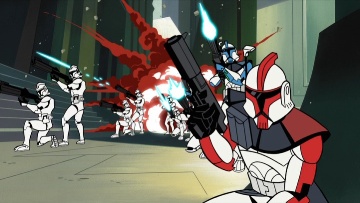 Send in the Clones!

Star Wars: Clone Wars is an Animated Adaptation Miniseries, written and directed by Genndy Tartakovsky, produced by Cartoon Network, and aired from 2003 to 2005. Clone Wars is set in the Star Wars universe, between the events of Episode II and Episode III. Where the prequel trilogy teases us with the beginning and end of the Clone Wars, this miniseries puts the "Wars" back in Star Wars and actually shows the meat of that galaxy-spanning conflict.

It should not be confused with the CG film and TV series Star Wars: The Clone Wars. It could be considered a spiritual pilot for that series, but the two don't have any of the same writers.

The first half of the series (Seasons 1 and 2) shows Obi-wan Kenobi and Anakin Skywalker leading the Clone forces in the Battle of Muunilinst. Obi-wan leads the ground forces, and ends up battling the mercenary Durge. Meanwhile, Anakin leads the space battle, then gets drawn into a one-on-one fight with the Dark Jedi Asajj Ventress.

Interspersed with this are shorter scenes from other characters and other battles: ARC troopers taking a key enemy position, Kit Fisto fighting underwater, Yoda and Padme rescuing two Jedi ambushed on an ice planet, and Mace Windu battling an army on Dantooine.

Then General Grievous shows up and kills a bunch of Jedi.

The second half of the series (Season 3) has only two main storylines and no side-stories. Beginning with the rescue of the Jedi from the last season's cliffhanger, it shows the tide of the war shifting against the Republic due to Grievous' arrival. The Jedi Council responds by promoting Anakin to Jedi Knight. A montage of Anakin kicking butt ensues, then he and Obi-wan are dispatched to Nelvaan to find Grievous. In this story, Anakin receives a trippy vision quest that foreshadows his later fall to the Dark Side.

Tropes used in Star Wars: Clone Wars include:
Retrieved from "https://allthetropes.org/w/index.php?title=Star_Wars:_Clone_Wars&oldid=1914978"
Categories:
Cookies help us deliver our services. By using our services, you agree to our use of cookies.