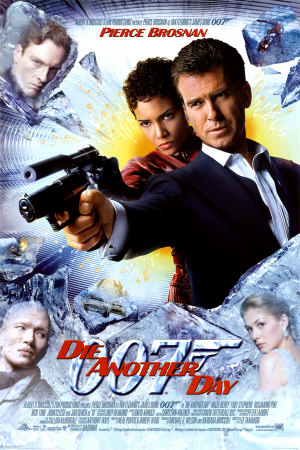 The 20th James Bond film, starring Pierce Brosnan in his last appearance as the character (second to last if you count the surprisingly good, in-continuity video game James Bond 007: Everything or Nothing, in which he does the voice-acting).

After Bond is captured during an operation in North Korea and subjected to 14 months of torture, he is exchanged for a high ranking "military official" (a.k.a. terrorist). This sets off a chain of events where Bond goes on a vendetta against said official.

Tropes used in Die Another Day include:

Q: Here's the manual, should be able to shoot through that in a couple of hours.
Bond: Just took a few seconds, Q.

Bond: Give me the old firing range anyday, Quartermaster.
Q: Yes well they call it the Future, so get used to it. (takes Bond into a museum of Call Backs)
Bond: This where they keep the old relics, is it?

Q: As I learned from my predecessor, Bond, I never joke about my work.

Zao: Who sent you?
Jinx: Your momma. She wanted me to tell you that she's real dissappointed in you.