Jump to content
(Redirected from Percy Jackson and The Olympians) 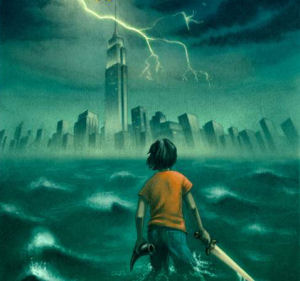 Percy Jackson & the Olympians is a Fantasy series by Rick Riordan based on Greek mythology. A Sequel Series, The Heroes of Olympus, The Trials of Appollo, Magnus Chase and the Gods of Asgard, and The Kane Chronicles soon followed. Its first two books,The Lost Hero and The Son of Neptune, have already been released. The Film of the Book, Percy Jackson & the Olympians: The Lightning Thief, was directed by Chris Columbus, the same guy who directed the first two movies in the Harry Potter film series.

In the books the Greek gods have moved to the United States, and their home, Olympus, is now located above the Empire State Building. They have many demigod children with mortal humans. Unfortunatly, these demigods attract mythological monsters, so they must travel to a safe haven in Long Island, NY, called "Camp Half-Blood", and learn to fight. The books get progressively Darker and Edgier throughout the series as a war with the Titans approaches.

The books in the main series are:

There are also three companion books:

Please add all new character tropes to the Character Sheet.

Tropes used in Percy Jackson & the Olympians include:

Tropes which only apply to the film

Retrieved from "https://allthetropes.org/w/index.php?title=Percy_Jackson_%26_the_Olympians&oldid=1969259"
Categories:
Cookies help us deliver our services. By using our services, you agree to our use of cookies.