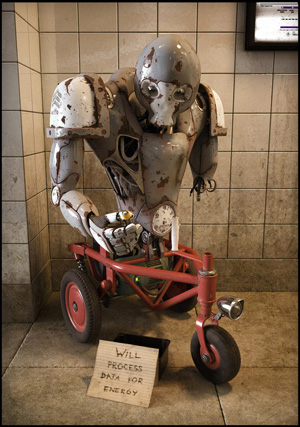 Genius: The Transgression is a fan Gameline for the New World of Darkness setting created by the author/artist of webcomic The Water Phoenix King, Kyle Marquis (better known on RPG.Net as Moochava), detailing the adventures of Geniuses, Mad Scientists who can build impossible machines (called Wonders) thanks to their connection to the mysterious light of Inspiration. Drawing on every sci-fi and horror cliché out there, Genius justifies the setting, expands the tropes along their logical progression and links its themes to the real world. It will be instantly familiar to any fan of the genre.

Grimm, the Catalyst of Fury: Defined by anger and a need for vengeance, justice, and/or the need to just plain vent. Naturally, they're the best at building weapons of every kind. They're also prone to being irrational and generally flying off the handle. As one might expect, they tend to take a very... direct approach to problem-solving.

Hoffnung, the Catalyst of Vision: Defined by hope and ambition, Hoffnungs seek to change the world. While this may seem like a good thing on the surface, many of them have a definite consequentialist mentality. Good at change and transformation. They also have a marked tendency to be extremely arrogant. Since they frequently have more contact with Muggles than the other Catalysts, they know better than anyone else what effects mere mortals fiddling with their inventions can have.

Klagen, the Catalyst of Loss: Defined by sorrow, loss and regret at some personal tragedy, Klagens are often called Cassandras for their tendency to see further tragedy in the offing and seek to prevent it. Sadly, having all the credibility of MAD scientists, they often live up to the name. They make excellent doctors and repairmen, but perhaps understandably have a tendency towards depression. They also tend to be the most down to earth and sensible of the Catalysts (at least, insofar as the term "sensible" applies to mad scientists), and often serve as the voice of reason in the collaboratives they join. This makes it all the more unfortunate that they are the least common Catalyst.

Neid, the Catalyst of Banishment: Defined by jealousy and bitterness, Neids are driven by the need to "show them all!" When a developing Genius feels rejected by his peers, when he blames his failures on "the man" keeping him down, that's when a Neid is born. They're good at mind control and apparently "psychic" powers--the more "out there" fields of mad science in terms of credibility and morality, in other words—and have a frankly unsurprising tendency to be paranoid and untrusting. Not without good reason, of course; many of them seem like magnets for mockery.

Staunen, the Catalyst of Curiosity: Defined by curiosity, wonder, and awe, Staunens simply love learning about the universe. They want to know more, they NEED to know more...even about those things that no sane person wants to think about, much less meet in person. As one might expect, they are very good at building scanners and communicators, and prone to fixation and obsession. Of all the Catalysts, they're the most interested in occult matters.

The five Foundations, the organisations of non-Lemurian Geniuses, represent various branches and kinds of mad science.

The International Union of Artifice: Known mainly for their Mad Engineering program. The Artificers are the poorest Foundation, with everyone from crazy old tinkerers to creative punk kids, and malcontents in the middle who've started unionising to try and make things easier.

The Fellowship for Manifest Direction: Known mainly for their Mad Psychology program. The Directors are the folks who get together in dark halls and plot how they're going to Take Over the World. They're mostly talk, though they are the most socially capable geniuses, and often assume leadership.

The Center for Circumferential Navigation: Known mainly for their Mad Physics program. The Navigators are fearless daredevils who travel far horizons, fight crime and test the experimental devices. The most recent group to join the Peers, originally the underclass of Lemuria but they've since earned their respect.

The Reformed Society of Progenitors: Known mainly for their Mad Biology program. The Progenitors, mostly composed of transhumanists, monster-makers and "creative" surgeons, are considered a bit crazy even by other Geniuses, and they're recovering from a recent bloody purge when a lot of them turned out to have gone off the deep end. But that totally won't happen again.

The College of Scholastic Theory: Known mainly for their Mad Philosophy program. The Scholastics are the oldest Foundation and the most introspective; they're more interested in figuring out the nature of Mania and other mysteries of the world. They range from librarians and archivists to Adventurer Archaeologists seeking ancient secrets of mad science.

There's also unaffiliated Rogues, Programs that act as minor Foundations (the most prominent being the Asia-based Ten Thousand Fans), and of course, Lemuria.

Lemuria's Baramins are, by default, the antagonist faction. They haven't got the memo that yes, they're MAD, and their theories and inventions only work by cheating reality. They believe that something went wrong with the human race's scientific and technological development, and they are hellbent on correcting the problem. Each Baramin is defined by where they think humanity went wrong and what must be done to correct the issue. This doesn't always work out so well.

Atomists remember old promises of futuristic technology that would sweep away all the world's ills and they're still pissed they didn't get it. They believe that all problems are inherently solvable with technology alone; violence, poor governance, and poverty only need the right invention before they're banished from Earth forever. That some of these applications are vastly unethical or flatly impossible does not seem to deter them, and their utter lack of interest in the human element only makes matters worse.

Etherites believe in a grand unified theory of science, one that neatly explains all phenomena and anomalies. Y'know, the sorts of theories scientists had before all that confusing "relativity" and "quantum mechanics." They ignore, explain away, or destroy contradictory evidence, and tend to get a bit twitchy if someone argues against their theories. They're also the ones with the Ray Guns.

Mechanists believe in a "clockwork universe", one that is not greater than the sum of its parts and can be reduced to a few simple natural laws. They also take fatalism to its logical conclusion, refusing to take responsibility for their actions; it's the fault of Their Upbringing. Or The Genetic Lottery. Or The Times. It's no wonder so many of them end up schizophrenic.

Phenomenologists believe that reality is subjective, and constantly "redefine their reality" to suit themselves. At its worst, they could honestly believe that no one ought to mind if they rummage around the orphanage for parts. It really doesn't help matters that their Grant makes it nearly impossible to tell when they're lying.

Oracles believe they know the moral order of the world, and see everything in absolutes, with predictable results. That their morality is often so outdated as to be unrecognizable does not help. They are also the nominal leaders of Lemuria, though the Atomists are displacing them.

The original human leaders of Lemuria were the Dharmists, who only answered to their Ophidian overlords. They despised innovation, and had an uncanny talent for manipulating other Inspired. They got wiped out in the Invisible Wars.

The newest group of unmada is the Numericals, a bunch of disaffected nerds upset that the internet became overrun by... normal people. They're not a true Baramin yet, but they regularly form and fade away with the times.

Genius was made on RPG.net and has slowly grown into a setting as rich and detailed as any White Wolf has created. Accessible through this elegant and finely-crafted link..

A work-in-progress wiki can be found here. It has fan made content here

Tropes used in Genius: The Transgression include:

This game lets you build

Retrieved from "https://allthetropes.org/w/index.php?title=Genius:_The_Transgression&oldid=1948181"
Categories:
Cookies help us deliver our services. By using our services, you agree to our use of cookies.