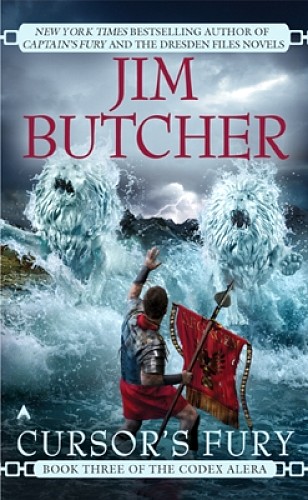 Yes, that is a Roman Legionnaire facing off against spirit lions made of water.

Magical Roman Legionnaires straight out of Avatar: The Last Airbender versus the Zerg, wolfmen with Blood Magic, telepathic yetis and white-haired elves. Riding ground sloths and terror birds. Sometimes, the Legionnaires fight each other, too.

Yeah, it is about as awesome as it sounds.

A high fantasy/intrigue series written by Jim Butcher (of The Dresden Files fame), the Codex Alera is set in a world that is populated by the descendants of one of the lost Roman Legions (according to the Word of God). They have carved out a massive empire led by the "First Lord" and they all have magic--specifically, they all bond with one or more "furies", elementals of air, water, fire, earth, wood or metal. Those who control enough furies can become Citizens, with increased privileges and obligations above the common freeman, but everyone has at least one fury. Well, everone save one.

Young Tavi is the only known Aleran who does not have access to any furies. At best, he is treated like a special needs child. At worst... well, they start at "freak" and move downhill from there. However, since he can not rely on furies, Tavi uses something that many of his countrymen fail to utilize: his brain.

Shortly before Tavi was born, the only son and heir of the aging First Lord of Alera was killed in battle, causing the various high nobility to scramble and plot to position themselves to take power when the First Lord dies (or, in some cases, to move that event forward slightly). Chief among them are Aquitainus Attis, the High Lord of Aquitaine, and Kalarus, the High Lord of Kalare. As Alera falls into civil strife, the various non-human enemies of Alera prepare to take advantage of these divisions while a far more dangerous threat lurks in the shadows...

Standing with Tavi are his uncle Bernard (an Earth- and Woodcrafter), his aunt Isana (a very powerful Watercrafter), the young Cursor Amara (a Windcrafter) and the half-wit slave Fade, along with the other friends and allies he makes (and one of Tavi's greatest skills is his ability to make allies, especially out of enemies: something lampshaded in the fifth book) as he is swept up in the battles to save Alera.

The sixth and final book in the series, First Lord's Fury, was released in November 2009.

A character sheet is now available.

The Codex Alera series provides examples of:
Retrieved from "https://allthetropes.org/w/index.php?title=Codex_Alera&oldid=1678159"
Categories:
Cookies help us deliver our services. By using our services, you agree to our use of cookies.