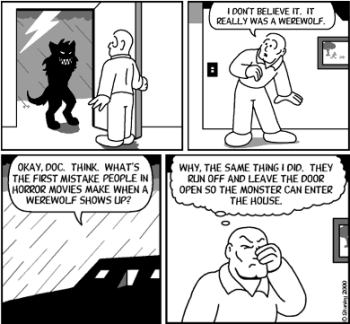 A Genre Savvy character has a Genre Blindness moment, which he immediately lampshades.[1]

A condition afflicting many fictional characters, seen when one demonstrates by their behavior that they have never in their life ever seen the kind of story they're in, and thus have none of the reactions a typical audience member would have in the same situation. Worse, they are unable to learn from any experiences related to their genre.

Genre Blindness is what keeps the cast of Three's Company leaping to outrageous conclusions even after the hundredth stupid misunderstanding, instead of sitting down and talking things out. It makes young girls go for walks in the woods after midnight without a flashlight when there's an axe murderer or a vampire around. It makes the supergenius supervillains in James Bond movies stuff the hero into an elaborate melodramatic Death Trap from which he inevitably escapes instead of just shooting him. It's why a Professional Wrestling referee always holds faces to the strictest letter of the rules, even as the heels break every rule in the book behind his back. It is one of the engines that drive the classic 1960s-70s sitcom.

Although genre blindness can be a legitimate flaw, it should be noted that it can be difficult for writers to create characters who are not genre blind without hanging a lampshade on it by saying something like "This is just like in the movies!", especially in genres which require suspense that can easily be undone by such comedic relief (such as horrors, thrillers, etc). Furthermore, some stories in some genres really couldn't function at all if the characters displayed an innate and complete understanding of what genre they were in and exactly how they should act at all times if they want to avoid trouble—which in most cases would also rob the story of tension and drama, since if the character knows exactly what to do to avoid trouble and conflict in their particular story, they'll do it, and consequently have an easy, trouble-free life, and... why are we watching again? Finally, not all of a genre's classic tropes are in fact Truth in Television, but as far as the characters are concerned, This Is Reality, so their "blindness" may be the same as common sense. For example, in real life, a single cough does not herald a fatal disease, so It's Probably Nothing is probably rational despite being Genre Blind.

Ultimately, while it can be a problem if used too egregiously, sometimes you just have to shrug your shoulders and chalk it up to Willing Suspension of Disbelief.

Examples of Genre Blindness include:

Retrieved from "https://allthetropes.org/w/index.php?title=Genre_Blindness&oldid=1939788"
Categories:
Cookies help us deliver our services. By using our services, you agree to our use of cookies.