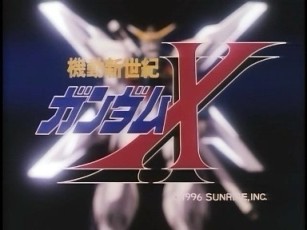 Is there a Moon?

After War Gundam X (Kidou Shinseiki Gundam X, lit. "Mobile New Century Gundam X") is the seventh, and shortest, Gundam TV Series. The story follows a group of scavengers called Vultures on a hunt to protect Newtypes. The series background involves a violent war 15 years earlier that killed nearly every human, in earth and space. It was not, as some had predicted, the end of the world. Instead, the apocalypse was simply the prologue to another bloody chapter in human history. And Gundam? Gundam never changes. Despite the grim premise, Gundam X retains a shockingly optimistic tone.

While scheduled for 49 episodes, it was cut short down to 39 due to Executive Meddling. Despite this resulting in the final arc being compressed from a planned 12 episodes to a mere 3, Gundam X managed to have an entirely coherent (if rushed) ending. It's sequel manga "Under The Moonlight", has become quite popular, and appearences in the Super Robot Wars games have gained it more popularity in recent years.

Tropes used in After War Gundam X include:
Retrieved from "https://allthetropes.org/w/index.php?title=After_War_Gundam_X&oldid=1964667"
Categories:
Cookies help us deliver our services. By using our services, you agree to our use of cookies.