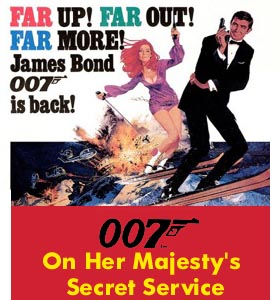 The sixth James Bond film, starring George Lazenby in his only appearance[1]. James Bond rescues a beautiful, but emotionally broken countess from committing suicide and her father, the leader of one of Europe's largest organized crime syndicates, asks Bond to woo and marry her in order to help her deal with her issues. Bond points out the ridiculous nature of this idea, but agrees anyway because Draco (The father) has access to information beyond the reach of official organizations and can help him get a lead on the head of SPECTRE, Enrst Stavro Blofeld. Blofeld, meanwhile, has developed a biological agent to induce sterility in plants and animals and potentially wipe out entire species, which he will use if he is not granted amnesty for all past crimes and an official acknowledgement of his claim to French nobility. Easily the most down-to-earth Bond film (except maybe From Russia with Love, Licence to Kill or the 2006 version of Casino Royale), it has a polarizing effect on fans. Some like it for its emotional depth and realism, some hate it for its (admittedly inexperienced) actor and lack of over-the-top theatrics (though others have come to think he did great). One undeniable aspect is that unlike most Bond villains, the Blofeld shown in this film has both a realistic goal and a chillingly realistic plan (albeit, a completely over the top execution of said plan). The film is one of the few where James Bond himself has actual emotional depth as well. There is also a twist Downer Ending that is quite unusual for the series, but sadly, it has fallen victim to casual spoilers.

Tropes used in On Her Majesty's Secret Service include:
Retrieved from "https://allthetropes.org/w/index.php?title=On_Her_Majesty%27s_Secret_Service&oldid=1928720"
Categories:
Cookies help us deliver our services. By using our services, you agree to our use of cookies.