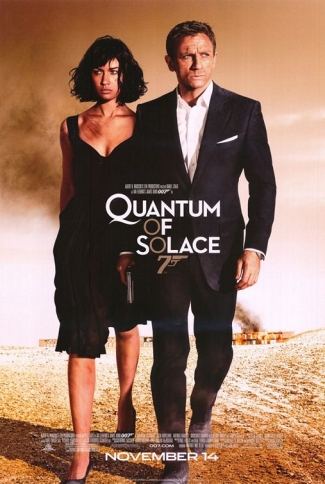 The 22nd James Bond film. The title is from a 1960 Fleming short story (which might be summarized best as, "James Bond attends a very boring dinner party with people he doesn't like and nothing happens,") and means "a small degree of comfort". The story follows on from Casino Royale, making it a true sequel among James Bond movies.[1] Bond, out for revenge following the death of Vesper Lynd, uncovers a plot by Quantum, the shadowy organization to which the first film's Big Bad belonged. A Quantum operative named Dominic Greene is engineering the overthrow of the Bolivian government, and it's up to Bond to find out why. Along the way he's helped by the mysterious Camille, who's got some unfinished business with one of Quantum's clients.

Quantum of Solace received a shellacking from critics for being too Darker and Edgier: its resemblance to The Bourne Series was particularly lamented, and many viewers criticized it for discarding too many of the series' signature tropes. As it eventually turned out, most of these issues occurred because the 2007-2008 Writers Strike left the film with more or less no script during production.

Tropes used in Quantum of Solace include:
Retrieved from "https://allthetropes.org/w/index.php?title=Quantum_of_Solace&oldid=1759798"
Categories:
Cookies help us deliver our services. By using our services, you agree to our use of cookies.