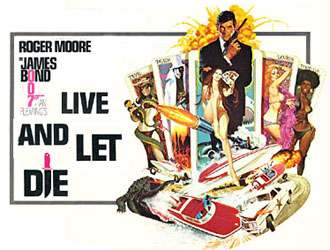 A fitting introduction to the wildest 007 of them all.

The 8th James Bond film, starring Roger Moore in his first appearance. James Bond is assigned to a case involving a drug lord that utilizes Voodoo (or at least the Hollywood version). After rescuing the drug lord's tarot fortune teller from her virginity (a controversial scene, since it involved Bond tricking her), it becomes a plot of everybody trying to kill them.

It's one of the more polarizing Bond films. Some like it for its change of pace (it's the first time Bond deals with organized crime and the supernatural), while others feel it was simply a Blaxploitation film with the 007 logo slapped on the front and were waiting for Pam Grier to show up. It is noteworthy in that amongst the things it did to try and distance it from the "silliness" of the Sean Connery era, it didn't include a scene with Q (he's mentioned though). This is a bit undermined by the fact that it's a film about Voodoo and includes Baron Samedi, implied to be the real deal. Plus, the gadgets used were further over the top than seen before, with a bit of an egregious Ass Pull of a rotary saw mode on the watch just when it was needed. On the other hand, the theme song is widely regarded as one of the series' all time best, and has achieved a good deal of success independent of the film.

Includes a boat chase in Louisiana, which resulted in at least a dozen speedboats being written off when they filmed it.

Tropes used in Live and Let Die (film) include:
Retrieved from "https://allthetropes.org/w/index.php?title=Live_and_Let_Die_(film)&oldid=1938584"
Categories:
Cookies help us deliver our services. By using our services, you agree to our use of cookies.