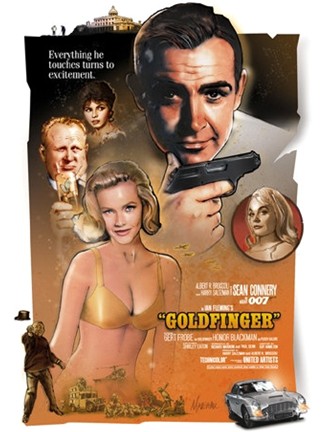 This was the third James Bond film and is one of the most iconic of the series. Part of what made it so good is that it is a shining example of a Pragmatic Adaptation that changed the title villain's rather ridiculous plot to literally rob Fort Knox in Ian Fleming's original novel into a plan that feels honestly and believably ingenious (not to mention changing the book's rather blatant racism and sexism).

Has several famous Bond-movie scenes, including Goldfinger threatening to cut Bond in half with a laser, Bond's high-stakes golf game and the death of Goldfinger's traitorous employee Jill Masterson, who for helping Bond ends up with her neck broken, her naked body sprawled across her bed and painted gold.

This movie also gave the franchise its first Cool Car. In fact, one of the great virtues of the film is that the gadgets shown, such as the car and the personal tracer, are 40+ years old and they still look both believable and neat (and in the case of the GPS-esque tracer, are modern-day consumer goods).

Tropes used in Goldfinger include:
Retrieved from "https://allthetropes.org/w/index.php?title=Goldfinger&oldid=1922028"
Categories:
Cookies help us deliver our services. By using our services, you agree to our use of cookies.