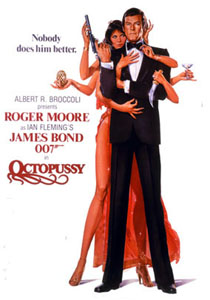 The 13th James Bond film, starring Roger Moore. After a replica Fabergé egg is found on an assassinated agent, Bond is sent to India to infiltrate a circus gang led by Octopussy (Maud Adams, the only Bond girl actress to make a second leading appearance).

007 soon discovers a connection between the priceless Fabergé egg, an elaborate smuggling operation and a meeting with a renegade Russian General Orlov who plans on detonating a nuclear device at Octopussy's circus as part of his plan to instigate World War III.

Despite the title, it has surprisingly little to do with Naughty Tentacles.

Tropes used in Octopussy include:

Mishka: And this (prepares to throw knife at Bond). . .for my brother! [throws knife at Bond, but misses]
James Bond: (Throws the knife back and impales him) And that's for 009!

Q: 007 on an island populated exclusively by women? We won't see him till dawn!

Security Guard:: Captain, some nut went through here in a stolen car! Wants the base commander, and he's wearing a red shirt!

Bond: (looking at Magda's tattoo, on the small of her back) What is that?
Magda: That's my little Octopussy.