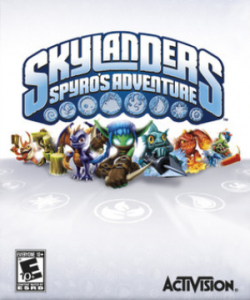 With The Legend of Spyro Trilogy finished and the upcoming movie cancelled, it was time for Activision to come up with another idea for a Spyro game. And they decided upon one of the most radical and controversial changes to the Spyro the Dragon franchise since, well... The Legend of Spyro.

Skylanders: Spyro's Adventure is a game on multiple platforms. It's putting the mood back to lighthearted after the Darker and Edgier previous games, and as this is yet another Continuity Reboot, all the characters but Spyro and a couple carryovers are brand-new. Gameplay's also focused on puzzle-solving/shooting rather than the original games platforming or the Beat'Em Up style of Legend. But if Skylanders is not so different from classic Spyro, what's the big change?

See, the game comes with a device called a "portal," plus three toys. The idea is that if you want to play as a character, you put their toy on the portal and the game instantly switches to the new character. This can be done at any time, even in the middle of gameplay. With over thirty toys available, this does make this game Merchandise-Driven, but since the game comes with Spyro and two others - Trigger Happy and Gill Grunt - you don't have to buy extra toys unless you want to.

The singular game is actually multiple separate games, with the ability to port characters and their stats and equipment between them. The "main" game is the one on home consoles (Xbox 360, Play Station 3, and Wii) and PC. There's also a 3DS version which includes different starter characters and is more of a platformer than the console version. Finally, there is Skylanders: Spyro's Universe, a browser-based Minigame Game with some MMO lite features such as the ability to wander around chatting with other players while using your Skylander as your avatar. An iOS arcade shooter, Skylanders: Cloud Patrol, was later released.

Common complaints lodged against this game include Spyro's radically different design and no other old Spyro characters returning (except Cynder). Common praises include beautiful graphics and fun-looking gameplay. The toy gimmick could go either way - it drives the cost up (similar to Activision's deceased Guitar Hero) and is a blatant merchandising ploy; yet it's novel and well-executed, setting it apart from being just another game out there.

Despite the complaints, Skylanders turned out to be a huge hit, selling out in many stores before Christmas 2011. In fact, a sequel was announced just months after the original game's release, even before all the toys made it onto store shelves. Skylanders: Giants will add 16 more characters, eight of which are at least double the size of the regular Skylander toys and will have the in-game strength to match.

Tropes used in Skylanders: Spyro's Adventure include:
Retrieved from "https://allthetropes.org/w/index.php?title=Skylanders:_Spyro%27s_Adventure&oldid=1694451"
Categories:
Cookies help us deliver our services. By using our services, you agree to our use of cookies.