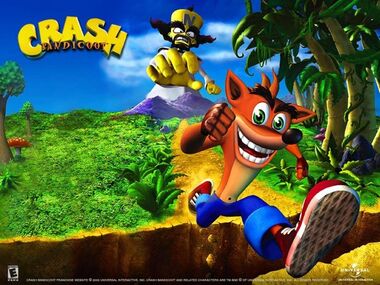 Crash Bandicoot is a video game series once seen as Sony's unofficial mascot and its answer to Mario and Sonic the Hedgehog. The games star the eponymous Crash Bandicoot, a genetically enhanced marsupial and failed experiment on behalf of Doctor N. Cortex, resident Mad Scientist and world conqueror, and more often than not the two wind up butting heads against one another, either for Crash to thwart Cortex's evil plans or just racing go-karts against one another. The games are mostly platform or action/adventure.

The series is famed for its humorous cartoony tone (losing a life often forms an amusing slapstick death for Crash and nearly all levels (and even some of the characters) have ridiculously Punny Names, for example); an element that was exaggerated more and more as the series went on, with later games featuring an overwelming amount of pop-culture based non sequitur humor spaced throughout gameplay chit-chat.

The following tropes are common to many or all entries in the Crash Bandicoot franchise.
For tropes specific to individual installments, visit their respective work pages.
Retrieved from "https://allthetropes.org/w/index.php?title=Crash_Bandicoot&oldid=1783895"
Categories:
Cookies help us deliver our services. By using our services, you agree to our use of cookies.