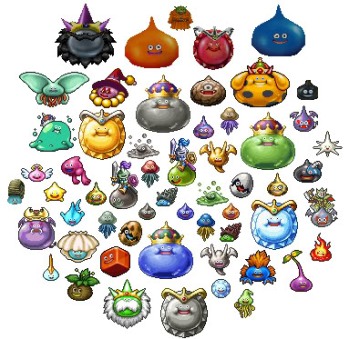 Sprites and textures are expensive. Original ideas for monster types are even more so. As a result, there is a tendency to keep the number of distinct enemy types small. In an RPG or similar game where the player is expected to become more powerful over the course of the game, this is a problem, as the monsters stop being challenging about the time you Get on the Boat.

The solution many games go for is to have a small set of monster types, but have them appear with different graphics. Often, this change of design will be accompanied by a new adjective to go with their name (if the monster was based on a mythological or cryptozoological creature, subsequent names will be alternate names for the creature (Bigfoot to Sasquatch to Yeti), or the name of a similar creature (Cockatrice to Basilisk)). Typically, all such monsters will be vulnerable to the same strategy, or a variation thereupon, but later colors will tend to be more powerful. Elemental variations are a common version of this trope as are variations in size and adding or removing features like horns or wings or crowns.

Underground Monkeys are often Palette Swaps, meaning only the colors change but models are recycled, but they don't have to be. As long as they're recycled versions of previous enemies, the changes between the different versions could be anything. You might have normal Goombas, winged Goombas, spiked Goombas... Even King Goomba is a type of Underground Monkey.

Results in the somewhat strange phenomenon that as you travel a diverse world, rather than seeing a diversity of creature types, you see the same creature types, in a diversity of versions: in The Lost Woods, you find the Wolf, the Giant Rat, and the Forest Dragon; in the Slippy-Slidey Ice World, you find the Arctic Wolf, the Snow Rat, and the White Dragon; in the Temple of Doom, you'll face the Dire Wolf, Plague Rat, and Zombie Dragon.

The most common Underground Monkeys are those whose names begin with one of fire, ice or lightning. In games which play Elemental Rock-Paper-Scissors, the colors may also indicate elemental weakness.

Named for a Running Gag in RPG World, wherein the Underground Monkey is suspected of being attracted by Genre Savvy characters.

Examples of Underground Monkey include:

Retrieved from "https://allthetropes.org/w/index.php?title=Underground_Monkey&oldid=1857141"
Categories:
Cookies help us deliver our services. By using our services, you agree to our use of cookies.