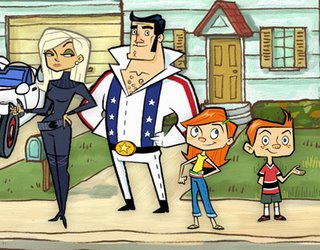 The Replacements (2006-2009) was a Disney Channel animated TV series. The opening sequence explains that siblings Todd and Riley lived in an orphanage, with no explanation of what happened to their parents. Stumbling across a Fleemco comic book, they mail-ordered a Fleemco phone (which allows them to replace any person or animal they desire) and in the process they got new parents: a female British secret agent named K (along with her sarcastic talking car) and a none-too-bright professional daredevil named Dick Daring.

Whenever Todd and Riley want to replace someone, they push a special button on their Fleemco phones, connecting them with Conrad Fleem. Fleemco immediately replaces the person with someone more to the liking of Todd and Riley. The series follows their chaotic misadventures as they use Fleemco to attempt to better their lives in nearly every problematic situation they encounter. (Although as the series progressed they managed to get into trouble with Fleemco replacements barely figuring into the episode.)

No relation to a football movie starring Keanu Reeves. Or the Minnesotan punk band.

Tropes used in The Replacements (animation) include:
Retrieved from "https://allthetropes.org/w/index.php?title=The_Replacements_(animation)&oldid=1795371"
Categories: