The Power of Love

Everything About Fiction You Never Wanted to Know.
(Redirected from Power of Love)
Jump to navigation Jump to search 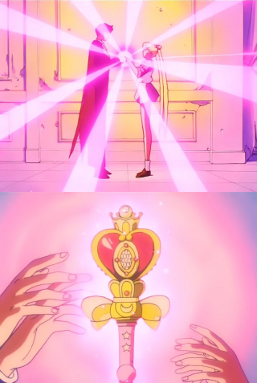 One Empathic Weapon, coming up!

(For an even better effect, listen to this while reading the page.)

The Power Of Love is a curious thing. It makes one man weep, and another man sing. It can change a hawk to a little white dove. Bring inanimate objects to life. It might just save your life. It makes people want to give up personal freedom to belong to each other. Don't you dare mock, that's the Power of Love.

Common applications of The Power of Love include activating an Empathic Weapon, freeing a loved one from mind control, strengthening a loved one, and converting a Real Death into a Disney Death. Even when the power of love is not literally and directly responsible, the scene is often set such that the audience is left with the impression that it was "really responsible".

Don't You Dare Pity Me! can sometimes be overcome by the Power of Love; however, it may take time, and the love itself must be purified of any pity it does contain.

The Green-Eyed Monster may come into play. In more idealistic shows, it is an enemy of true love. However, more cynical shows may treat it as normal, and even let it overcome Cannot Spit It Out.

In these cynical times, this often feels like a supreme rip-off. It depends on where you, and the scene in question, fall on the Sliding Scale of Idealism Versus Cynicism. More conventionally, Love Redeems evil. When it's not turning you evil, that is. Or, less often, supporting said baddies.

Sometimes, love for someone who's threatened can give someone a Heroic Second Wind, especially a Mama Bear/Papa Wolf.

A more passive but no less impressive display of the Power of Love is it's ability to use the Red String of Fate to reunite the reincarnated lovers.

A Sister Trope to Light'Em Up and Holy Hand Grenade.

Contrast with The Power of Hate. Occasionally classified as one of the Elemental Powers.

Examples of The Power of Love include:

That's the power of love!

Retrieved from "https://allthetropes.org/w/index.php?title=The_Power_of_Love&oldid=1924049"
Categories:
Cookies help us deliver our services. By using our services, you agree to our use of cookies.