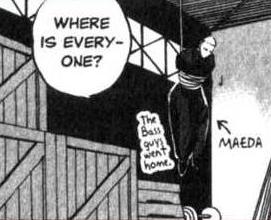 Don't you just hate when your friends make plans and leave you hanging?

So the adventure's over, the team beat the enemy or found the treasure and got out alive, and it's finally time to relax, say their goodbyes, and head home. And someone says, "I've got this nagging feeling that there's Something We Forgot."

Cut to a major MacGuffin that got left in the dungeon. Or an ally who got trapped is still waiting for them to get back. Etc.

Related to Brick Joke. Often deployed as The Stinger. Contrast What Happened to the Mouse?, in which a dropped plot element does not get another mention.

Examples of Something We Forgot include:

Retrieved from "https://allthetropes.org/w/index.php?title=Something_We_Forgot&oldid=1708710"
Categories:
Cookies help us deliver our services. By using our services, you agree to our use of cookies.