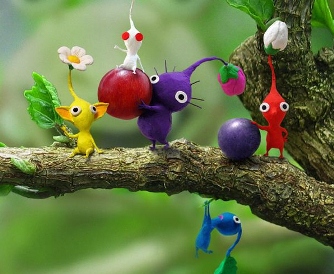 Aren't they adorable? Now go order them to die in the name of your capitalist society.

Real Time Strategy at its quirkiest, the Pikmin series came about from a mix of the Super Mario 128 project, Shigeru Miyamoto's childhood observations of insects at work, and general RTS gameplay. The Pikmin games lead players into a world where they must use the different kinds of plantlike creatures called "Pikmin" to defeat enemies, produce other Pikmin, collect treasures, and survive in a strange world with even stranger creatures.

The first game's basic storyline follows Captain Olimar as he crash-lands on a mysterious planet, destroying much of his ship in the process. The parts are scattered all over the region, leaving Olimar to command armies of Pikmin to get them back.

The twist? He has 30 days to do it, or he dies from the dangerous oxygen in the air! Sounds fun already, doesn't it? Enough people seemed to think so, and the game became a hit in the Nintendo community.

A sequel was soon created, Pikmin 2, in which Olimar and his partner Louie went back to the planet in search of the rare treasures it held, in an attempt to bring their company back out of debt. Pikmin 2 soon became even more critically acclaimed than its predecessor, gaining rave reviews for its improved timespan, reliability, clever challenges, and unique style.

Pikmin 3, released in 2013 for the Wii U, introduces a system where the tablet can be used to have a quick look-around of the map. If you play with the tablet alone, the game controls and looks more like a Real Time Strategy game. Interestingly enough, the player will not step into the shoes of Captain Olimar this time around, but rather four new pilots that can be used in tandem to solve puzzles and manage Pikmin.

The first two games have been ported to Wii as well, with enhanced Wii-mote controls and a higher price. Olimar also is a playable character in Super Smash Bros. Brawl.

It has a wiki, of course.. Compare to Overlord with a similar gameplay but darker premise.

Not to be confused with Pickman or Pac-Man.

Tropes used in Pikmin include:
Retrieved from "https://allthetropes.org/w/index.php?title=Pikmin&oldid=1866463"
Categories:
Cookies help us deliver our services. By using our services, you agree to our use of cookies.