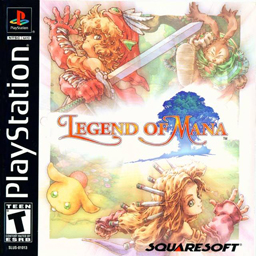 Legend of Mana is the first game in the World of Mana series to be released on the Playstation.

Unlike the previous games in the World of Mana, which have a fairly straightforward story, Legend of Mana is much more of a Wide Open Sandbox. You collect artifacts, which you can place on a grid, magically turning them into towns and dungeons. Various events and quests will occur in the places around you. While many are one-shot deals, there are three major arcs and several minor ones that will pop up. You don't actually need to complete more than one arc to finish the game, but it is possible to do every single event in a single playthrough.

Legend Of Mana plays more or less like Seiken Densetsu 3 with a few additional quirks:

It was released on the American Playstation store as a PS One Classic on March 22, 2011.

Tropes used in Legend of Mana include:
Retrieved from "https://allthetropes.org/w/index.php?title=Legend_of_Mana&oldid=1611034"
Categories:
Cookies help us deliver our services. By using our services, you agree to our use of cookies.