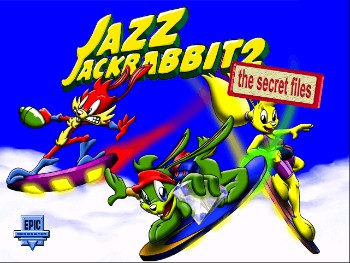 Remember Aesop's The Tortoise and the Hare? Imagine that same struggle, only 2,000 years into the future with both participants as anthrophomorphic animals, armed to the teeth and out for each others' blood.

Developed by Epic Megagames, who would eventually rise to further fame as just Epic Games and go on to develop games like the Unreal series and Gears of War, these games starred the titular rabbit hero with quick feet and a big gun, crossing galaxies to butt heads with the evil Devan Shell and to free the captured princess of his home planet. Once considered PC gamers' response to the likes of Sonic the Hedgehog, the Jazz Jackrabbit games sold on fast-paced run-and-gun action (with bonus levels surprisingly similar to Sonic's) and the titular Mascot with Attitude. The first two games in the series received many expansion sets, including Christmas-themed ones, and the franchise ground to a halt when the third game failed to ship. Surprisingly, the games still maintain an active online community, and Jazz Jackrabbit 2 is still actively played online by the proud and the few to this day.

Tropes used in Jazz Jackrabbit include:
Retrieved from "https://allthetropes.org/w/index.php?title=Jazz_Jackrabbit&oldid=1795311"
Categories:
Cookies help us deliver our services. By using our services, you agree to our use of cookies.