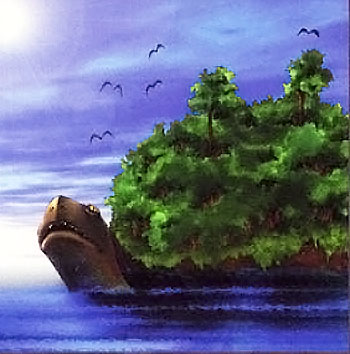 Mythical creatures of mystery: Fish, whales, or turtles (there's a definite preference for turtles over any other animal) big enough to be mistaken for islands or even continents have shown up in Myth and Legend for thousands of years. They are often portrayed as being so large and ancient that soil and plantlife have grown on its back, sometimes ancient species containing something so rare that the hero (or villain) must marvel at it or try to obtain it. Often the hero gets only a brief opportunity to marvel at its existence, before it decides to set out and dive deep underwater, leaving the protagonist high and dry (or wet and drowning if he doesn't manage to get off in time). How the fauna and flora on its back can survive and grow when it frequently dives underwater is rarely addressed.

A subtrope of That's No Moon.

If Earth is one of these, there's a good chance it's Turtles All the Way Down.

Examples of turtle islands include:

Retrieved from "https://allthetropes.org/w/index.php?title=Turtle_Island&oldid=1847507"
Categories:
Cookies help us deliver our services. By using our services, you agree to our use of cookies.