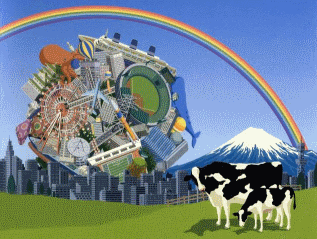 We are moved to tears by the size of the thing.

The King of All Cosmos gets drunk one night, and on a drunken bender accidentally destroys all the stars in the sky. The following morning, he assigns his son, the Prince, to make new stars by collecting random objects from the Earth to be turned into stars. The Prince, who had been treated rather badly by his father up to now, does this by running the objects over with a big sticky ball that makes bigger and bigger clumps of objects as it collects them. The Prince starts by collecting ants and thumbtacks, and eventually moves on to whales, jumbo jets, office towers, and sports stadiums...

Katamari Damacy is a delightfully addictive acid trip that only the Japanese could have created. The controls are simple, the game is brightly coloured and fun, and, for the concerned parent, nonviolent--although you are rolling up people, most of whom scream. It's great at a party. Recreational drugs optional... and, really, they'd be redundant.

Tropes used in Katamari Damacy include:
Retrieved from "https://allthetropes.org/w/index.php?title=Katamari_Damacy&oldid=1741359"
Categories:
Cookies help us deliver our services. By using our services, you agree to our use of cookies.